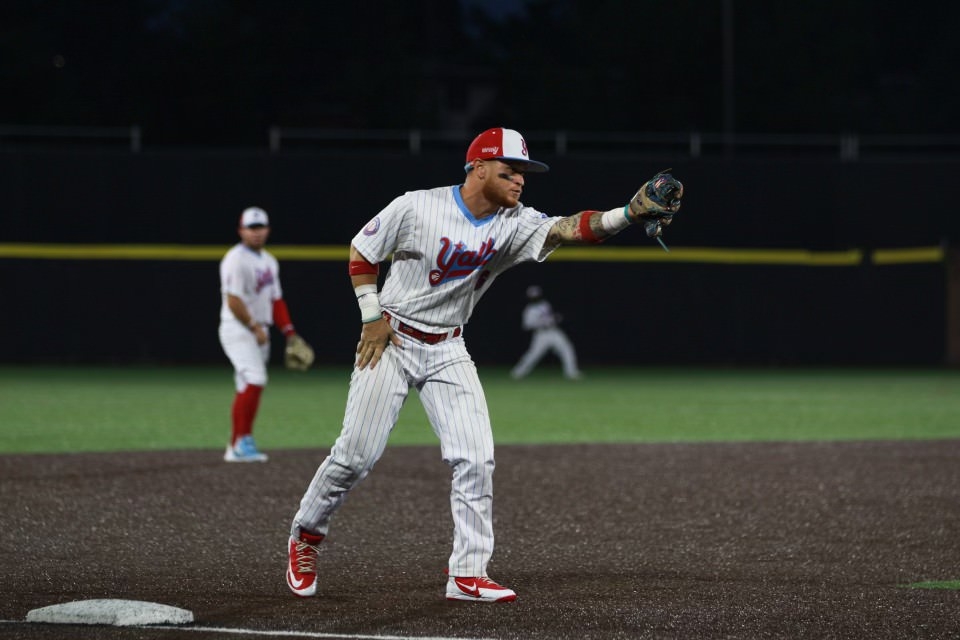 Photo: Luis Pintor mans third base for the Florence Y'alls at Thomas More Stadium. Pintor, who made his season debut this week, was an all-star for the Y'alls last season. (Nick Theuerling)

Florence, Ky. – Anthony Brocato and Brennan Price each launched a grand slam for the Florence Y’alls (30-38) in a 16-6 defeat over the Schaumburg Boomers (35-32) at Thomas More Stadium on Thursday night.

Brocato’s grand slam came in the second inning and checked in at 445 feet, the longest home run tracked all season. Price’s 408-foot shot came in the fifth. Catcher Cooper Edwards also went yard in the eighth for his first professional home run.

The Y’alls dealt with an inauspicious start, though. With rain pouring down in Florence at first pitch, Schaumburg scored four runs in the first inning which included a half-hour rain delay. Unlike last night, the Boomers’ bats did not keep the heat on. The Y’alls scored two runs in the bottom of the first and six runs in the next frame.

After every Schaumburg batter recorded a hit yesterday, the Y’alls did the same thing today in the rubber match. Luis Pintor led the way with three base hits, all singles. Price picked up 5 RBI in the win, bringing his season total to 69, second in the Frontier League.

Four-run first inning aside, Edgar Martinez settled in and went 4.1 innings as the starting pitcher. Sean Hughes, Kent Klyman, and Bryant Flete combined to pitch 4.2 hitless innings out of the bullpen. In Florence's two wins over Schaumburg this series, the bullpen has not allowed a single run.

Not to be overlooked, Flete, a position player, now has three scoreless and hitless innings under his belt. He is the first position player to pitch back-to-back games for the Y’alls this season.

With the series victory, the Y’alls have now won three of the first four series post-all-star break. With an 8-3 record in their last 11, Florence is one of the hottest teams in the Frontier League entering a slew of road games. The Y’alls are at Joliet for three games beginning tomorrow night.

The Florence Y’alls are Northern Kentucky’s professional baseball team, and are proud members of the independent Frontier League, an MLB Partner League. With a purposeful focus on entertaining our fans, the Y’alls provide affordable, family-friendly entertainment. Y’alls home games are played at Thomas More Stadium, located at 7950 Freedom Way in Florence, Kentucky. The Y’alls are at home against the Washington Wild Things Tuesday, August 9. First pitch is at 6:34 P.M. Tickets are on sale now for the 2022 season. More details can be found online at florenceyalls.com (http://florenceyalls.com/) or by phone at (859) 594-4487