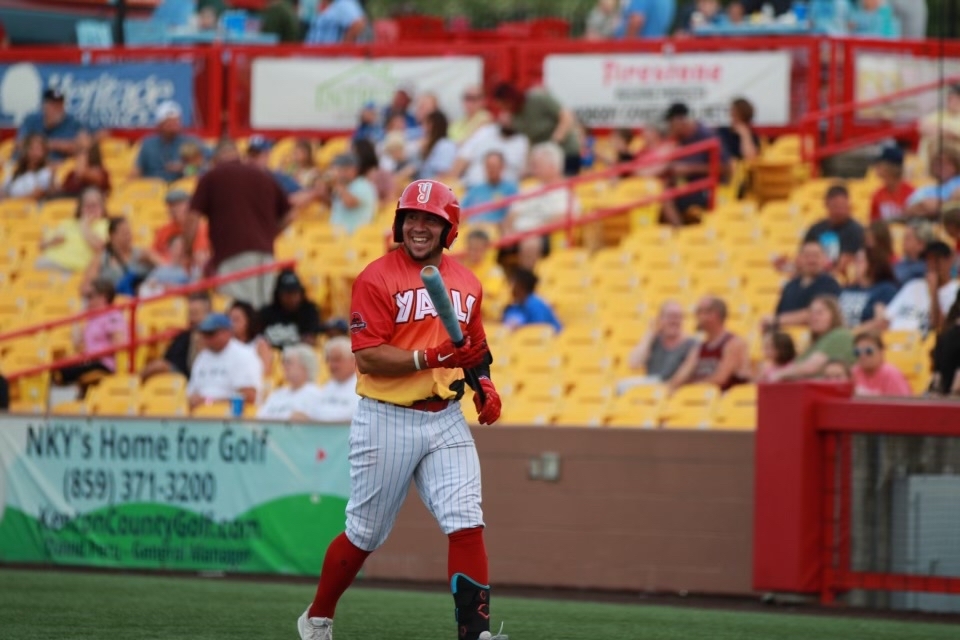 Brocato’s homer, his team-best 19th of the season, wrapped around the foul pole in left field to give the Y’alls a 5-1 lead. Sussex County (36-29) contested the ball was foul, but the umpires ruled after a long conference the play to be fair. Brocato is fifth in the Frontier League in home runs.

Sussex County would not relent all night, and the Miners brought the go-ahead run to the plate in the top of the ninth. David Maberry hit a deep fly ball to center field. After making the catch, Rodney Tennie threw to second base and caught Juan Silverio attempting to tag up, ending the game. For the second game in a row, the winning team recorded the final two outs in a double play, with Tennie the key player involved.

After allowing nine runs yesterday, Florence's pitching looked sharper tonight. Starter Edgar Martinez (4-4) allowed only one run in six innings pitched. After Kent Klyman, Darwin Ramos, and Karl Craigie came out of the bullpen, Evy Ruibal earned the save for the Y’alls.

The win is Florence’s sixth in the last seven games, and puts the team above .500 at home. The Y’alls go for their third consecutive series victory tomorrow at 1:07 p.m.

The Florence Y’alls are Northern Kentucky’s professional baseball team, and are proud members of the independent Frontier League, an MLB Partner League. With a purposeful focus on entertaining our fans, the Y’alls provide affordable, family-friendly entertainment. Y’alls home games are played at Thomas More Stadium, located at 7950 Freedom Way in Florence, Kentucky. The Y’alls are at home against the Sussex County Miners Sunday, July 31. First pitch is at 1:07 P.M. Tickets are on sale now for the 2022 season. More details can be found online at florenceyalls.com (http://florenceyalls.com/) or by phone at (859) 594-4487