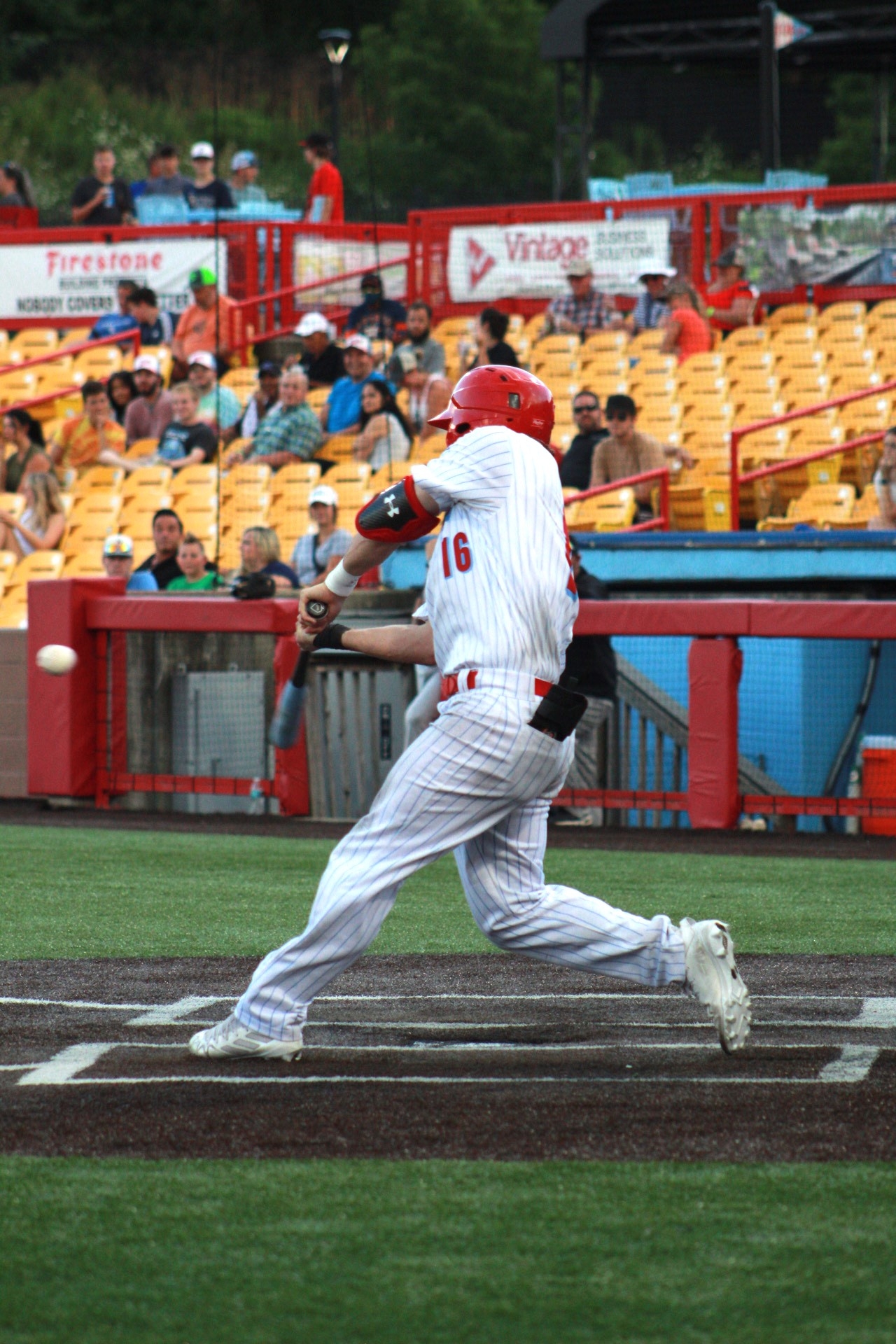 Photo: Anthony Brocato takes a swing. The Y'alls outfielder walked off with his 18th home run of the season on Thursday. (Nick Theuerling)

Florence, Ky. – The Florence Y’alls (27-35) were on the verge of disaster. Trailing by four runs in the seventh inning and one run entering the ninth, the Y’alls walked off against the Empire State Greys 8-7 at Thomas More Stadium on Thursday.

Empire State (3-60), the Frontier League’s traveling team, called in Jesus Rosario for a save opportunity in the ninth after having not pitched in two months. Brennan Price led off with a towering game-tying home run. The next batter, Anthony Brocato, hit a home run to almost the same spot in right-center to win it for the Y’alls.

Florence trailed 7-3 at the seventh inning stretch, but capitalized for three runs in that frame to make the comeback effort more manageable. Price had an RBI hit in that inning as well, one of four hits and three RBI on the night for the big first baseman. Ray Zuberer tacked on three hits for a Florence team that recorded 15.

Empire State swung the bats well, too. The Greys scored in the top of the first inning for the second straight game. More impressively, Empire State recorded a base hit in eight different innings. Manny Garcia and Liam McArthur each had three hits.

The Y’alls threw a bullpen game of sorts against the traveling Greys. Bobby Brabrand, in his first start with the team, went 4.2 innings and allowed two runs. Four relief pitchers combined to get Florence through the remainder of the game. Evy Ruibal earns the win.

While not in the way Florence envisioned, they pick up their first three-game series sweep of the season. A season-long five-game win streak carries them into a home series with Sussex County over the weekend. The Y’alls and Miners meet tomorrow at 7:03 p.m. from Thomas More Stadium.

The Florence Y’alls are Northern Kentucky’s professional baseball team, and are proud members of the independent Frontier League, an MLB Partner League. With a purposeful focus on entertaining our fans, the Y’alls provide affordable, family-friendly entertainment. Y’alls home games are played at Thomas More Stadium, located at 7950 Freedom Way in Florence, Kentucky. The Y’alls are at home against the Sussex County Miners Friday, July 29. First pitch is at 7:03 P.M. Tickets are on sale now for the 2022 season. More details can be found online at florenceyalls.com (http://florenceyalls.com/) or by phone at (859) 594-4487.